Reuben James,
In my song you’ll live again.
And the phrases that I rhyme
are the footsteps out of time
from the time when I knew you,
Reuben James

Reuben James
with your mind on my soul and a Bible in your right hand,
you said, ‘Turn the other cheek,
there’s a better world waiting for the meek.’
In my mind these words remain
From Reuben James

Reuben James,
One dark cloudy day they brought you from the field.
To your lonely pine box came,
just a preacher, me and the rain
to sing one last refrain
for Reuben James 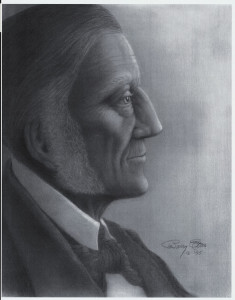 from Etris “American Poets ” collection
The song, “Reuben James,” has sold a staggering 30 million copies worldwide and has received well over one million radio airplays. A chart-topping hit by Kenny Rogers and the First Edition, the song was also recorded by country music greats Johnny Cash, Conway Twitty, Glen Campbell and Jerry Lee Lewis, among others, and has resulted in three gold and three platinum albums and worldwide recognition (and awards) for the man who penned the lyrics. That man is Roswell native Barry Etris.

Quiet and unassuming, Etris seems most at ease out of the limelight, sitting with his old guitar in his lap and painting vivid word pictures with a voice softened by time, tempered by experience and given resonance by an imagination that sings as sweetly as the strings when plucked.

With nearly 50 years of songwriting and performing under his belt, the Crabapple resident is decades from the boy who began publishing hits like “The Rebel” and “First Star” as a teenager. With a salt and pepper shock of hair but eyes as inquisitive and keenly observant as when he first embarked on his songwriting career, Etris is a master performer who knows exactly how to cast a spell on his audience.

“At this point, you’ve done everything embarrassing that can happen and you get all that out of the way so when you entertain you can look like an old pro,” he said with a gentle smile. “You’re not that fragile little guy you were starting out and the audience knows they’re in safe hands.”

Signature Song
In 1959, Etris’ songwriting career began with his first published songs, “Faded Rose” and “I Met My One and Only,” which he recorded through Leo’s records. A decade later, Etris would pen and have published the song that remains the most personally meaningful, not to mention professionally successful. 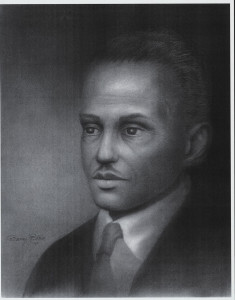 Langston Hughes
from Etris “American Poets ” collection
“‘Reuben James’ was inspired by the death of Barry’s father,” said Dotty Etris, the artist’s ex-wife, friend and partner. “Barry once told me that it took about a year for him to be able to completely write the song, due to the emotions involved.”

Though based on memories of his father, Etris eventually rewrote his celebrated “story-song,” as he calls his lyrical narratives, layering in the poignant imagery that would become an Etris imprint. Collaborating with hit song­writer Alex Harvey (best known for “Delta Dawn”), Etris recast the song’s namesake as a wise old Black man who was misunderstood and persecuted.

What happened next is the stuff of Hollywood but it began, appropriately enough, in Music City. In 1969, Etris shared his story-song with Nashville-based Billy Edd Wheeler, an award-winning songwriter and playwright who was recently inducted into the Hall of Fame by Nashville Association of Songwriters International. Wheeler sent the tune to Los Angeles to singer/songwriter Eddie Reeves who told Kenny Rogers about it while they were golfing. The two went back to Reeves’ office where he played Etris’ song for Rogers and, as is often said in the music business, lightning struck.

Over the years, a string of notable story-songs joined Etris’ prodigious body of work. They throw into the foreground society’s forgotten fringes, those invisible souls of old Roswell and rural Georgia who failed to leave a mark on many, yet captured Etris’ eye and artistic attention: Lum Crow, Jenny Claxton, Old Guy Tolbert.

“Time and time again, these sorts of marginalized and forgotten people, who lived and died in Barry’s beloved Roswell, would serve as his muses,” said Terry Krugman. Krugman, an Atlanta teacher, met Etris around the time Kenny Rogers and the First Edition had recorded “Reuben James” in the late 1960s. “Often, he would tell a tale of some misbegotten misfit and I knew that I was hearing Barry — who thinks in symbols and metaphors — thinking aloud. That he was consciously or subconsciously working the story into a potential song.”

‘Listen to Something for Me’
One of Etris’ tales involved an old Black man who, in the 1940s, danced for coins on the streets of Roswell. “It turned out that the guy had worked in the local cotton mill and had boxed on weekends for extra pay,” Krugman recalled. “But he was badly beaten one night and never ‘quite right in the head’ afterward. He ended up dancing on the street and enduring the taunts of passersby.”

Etris remarked that he should write a song about him and a week or so later, he called Krugman. ‘”Listen to something for me,'” Barry said when I answered the phone. Then he began singing:

They used him and abused him
like a raw piece of meat
They got rich off his fists and
his fast-dancing feet
They stood in his corner as he rose,
round by round,
But they left him to his beatings
on his lonely way down.

‘Time and time again, these sorts of marginalized and forgotten people, who lived and died in Barry’s beloved Roswell, would serve as his muses.”
TERRY KRUGMAN | Friend of Barry Etris

“Thus you have the origin of Barry’s ‘The Champion of Lavender Street,'” Krugman added.

Since recording his first song, more than 60 of Etris’ songs have been published by some of the nation’s leading publishers: The Lowery Group of Atlanta; United Artists in Los Angeles; and House of Gold, Tree Publishing and Warner Brothers in Nashville. Etris received a BMI award (Broadcast Music, Inc.) for “Reuben James” and for his song “The Bird,” co-written with friend Hal Coleman, which was later recorded by Jerry Reed and became a No. 1 country hit.

Industry insiders have long hailed Etris as a phenom in the music business. In fact, the legendary Bill Lowery, the top country music disc jockey in America in the 1950s, pioneer TV host on Atlanta television and founder of Lowery Music Company and the National Recording Corporation, called Etris “one of the very best story-song writers.”

Although early in his career, Etris professionally recorded his songs — including the regional hit, “The Devil and Ambrose Webster,” he soon realized that the urge to create superseded his desire to cut records — although he still performs his songs at venues like the Roswell Storytelling Festival and the occasional intimate gathering of friends. Besides storytelling through songs, Etris has served on the Board of Governors of the National Academy of Recording Arts and Sciences (NARAS) and has presented seminars on songwriting and publishing.

These days, the songwriter is working more on canvas than notepad. Sidelined by chronic vertigo 15 years ago, Etris began sketching with charcoal and pencil while trying to get his life back together, taking his inspirational cues from his story-songs. The result: several series of studies including “Faces & Songs,” “The American Poets” and “Authors of Georgia,” which features the state’s Pulitzer Prize-winning writers, the latter two both currently on display at The Teaching Museum in Roswell.

“The paintings are absolutely magnificent and we are so proud of them,” said Jacque Coxe, museum curator. “These portraits are one of our prized exhibits. Barry is exceptional in his talents. He is really a Renaissance man, wonderful at writing music, singing and painting.”

The paintings, showcased in the main hall of the museum, include some of literature’s most well-known and beloved authors: Emily Dickinson, Edgar Allan Poe and, Coxe’s favorite, Walt Whitman.

“‘The American Poets’ were my tribute to their work and they’re infinitely interesting people. I love that they would take delight in a wild flower and write a poem about it. It’s uplifting, like they’re still talking to you down 200 years of life and history,” Etris said. “I’ve always enjoyed literature, reading and philosophy; it’s all related to art. It’s one big lake of appreciation and knowledge and the deeper and richer you can make the lake, the better your three-minute song, your art, your thoughts. It all kind of works together. It’s a wonderful, joyous thing to have a creative urge.”

Etris said that painting, for him, is a cerebral experience. He begins with a general concept that he sees and develops in his imagination and then defines on canvas.

“I approach a painting exactly the same way I write a song,” he said. “I have an overall concept that I then define on paper. In my mind, the writing and the painting are parallel procedures.”

Although he is still writing songs, Etris says that the older he gets, the more he gets into his artwork; however, his “new” artistic skills actually presented themselves during his childhood. From his earliest years, Etris had an abiding interest in drawing and painting and can still remember, as a toddler, watching his cousin, Thomas Marshall, at the drawing board.

“Thomas was my hero — still is,” Etris said. “He drew cartoons and I would try to do that, too. It grew into a really huge interest in fine art.”

By the time Etris was in the eighth grade, he was drawing with the practiced eye and purpose, as well as finesse, of someone much older and experienced. His art teacher, Ms. Jean Williams, took him under her wing and introduced the burgeoning artist to art history, artistic styles and movements, the Great Masters.

“She gave me a college education in art in the eighth grade,” he said, fondly recalling Ms. Williams’s admonishment that simply having talent in painting and drawing was not enough. “She challenged me, took me through all the abstract painters, the surrealists, the impressionists and taught me how to appreciate [these artists]. I owe the bulk of what I do to her.”

While Etris hasn’t yet parted with Nashville and its music scene — he currently has three songs that he needs to get to Nashville — the music world has also embraced his artwork. He illustrated an old folk song and drew the rendering of “Little Sparrow” for Dolly Parton that was used in the album’s sleeve. Parton also has some of Etris’ art hanging in her Tennessee Mountain home in the Smoky Mountains.

“Barry Etris is a talented artist, both visually and musically,” Parton said. “I love his song, ‘Rueben James,’ and I love his artwork, too. That’s why some of his work is displayed in my homes.”

Calling painting a source of joy that “is there for anyone to enjoy and appreciate,” Etris explained how it has enhanced his own life. “Painting makes you see a lot more when you really start looking. Your vision suddenly perks up. You start looking closely at the details, memorizing what you see and remembering — the little dents and veins in a face.”

Said Dotty, “We go for a walk in the woods and I see trees. Barry sees each vein in a leaf, how the sunshine shimmers on the leaf, the shape of the shadows they create. It gets to be a very one-sided conversation in which I am reminded just how observant and perceptive he really is.” PN